Today is the first October 2013. The weather has changed dramatically and it has been pouring rain all morning. Nevertheless I have just been part of a very energetic and uplifting prayer service in Lusk parish to bless the beginning of the school year.  All the pupils from Hedgestown and Corduff Primary schools and the Confirmation and Communion classes from Lusk National School were there – over 400 pupils in all.  The singing was something to hear – they literally raised the roof especially with the song “Circle of Friends” from the Alive-O schools programme.   This is one of the songs the First Communion children learn.

The church looked beautiful too – after its recent facelift ie painting, new heating, lights etc. Its a beautiful old church – a detached six-bay neo-Romanesque Roman Catholic church, built in the 1920s.  The first church was  built on the site in 1809 at a cost of £ 2000. That building stood until about 1922 when it  was declared unsafe and was replaced with the present church. 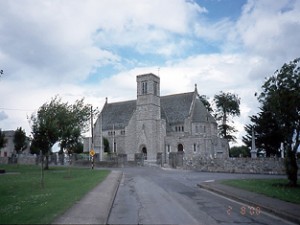 (See the website Buildings of Ireland for further information). As an extra bonus it also has some stained glass windows by Harry Clarke.  The parish itself was constituted in 1669. The name of Lusk dates back to the time of Saint MacCullin, who founded a church there in the 450s and died in 497. He is reputed to have either lived or been buried in a cave, hence the name Lusk from the Gaelic word Lusca meaning a cave or underground chamber.  St. MacCullin is the patron saint of Lusk.

Earlier today I had a meeting of the Bible Reading Group from Rush, Lusk and Skerries.  We met here in Lusk and we had about 12 people today – numbers vary from week to week.  The piece of Scripture for reflection this morning was from 1 Corinthians 13 about love. See copy of Reading and reflection here. (I have given the website that I took the reflection on love from)  Prayer for bible Reading Group Meeting 33 – it generated a lot of sharing and presented challenges to us all.  The Bible Reading group was set up as an initiative for the Year of Faith and we are following a plan to read the Bible in a year – reading a certain number of Old and New Testament chapters each week.  Some have given up on the Old Testament at this stage but that’s ok – we have agreed that we are going to continue even when the year is finished and will pick specific areas of the Bible to concentrate on in more detail then.  We also have a series of talks with a Scripture scholar scheduled  to start in January next  and roll out over next year – 6 sessions on the Gospels; 6 on the Old Testament and 6 on the letters of Paul.  Looking forward to that – More on that later!

Finally I had a meeting of Lusk Parish Pastoral council (PPC) this evening.  A lot of good work being done by a lot of energetic people.  We also are in the process of having the work of the PPC reviewed in a structured way – Rosemary from the Office of Evangelisation visited to talk us through the process and will be back in a few weeks time to facilitate the full review – an excellent opportunity to take stock of where we are going, what we are doing  and why we do what we do, as a Parish Pastoral council.  I went through the same process with Rush PPC before the summer and it was a really useful process as a variety of issues came up for attention that  will help form part of the planning process for the future.